A mix of annuities and outcome-orientated investments for retirement

Retirement research1 carried out by Schroders with 700 people, who were in or near retirement, found that respondents target to save an average of HK$2 million (US$254,814) for retirement, and on average expect to spend HK$12,800 per month when they have stopped working. 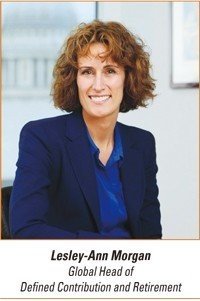 Lesley-Ann Morgan, global head of defined contribution and retirement at Schroders, says: “If people do have around $2 million at retirement and you look at how people invest, which is quite conservatively, their money will probably only last 16 years even with some low single-digit returns.”

The research found that on average, people allocate nearly 70% of their assets to cash, time deposits and insurance policies and other lower risk/return assets, with the next major allocation held in equities.

Ms. Morgan points out that with inflation and the high life expectancy in Hong Kong, people risked seeing their quality of life erode as they got older if they kept such a high allocation of their assets in cash.

An annuity anchor and growth investing

Ms. Morgan says one approach would be for people to consider putting some of their money into an annuity. Also from the Schroders research, 19% of the respondents were either very interested or quite interested in annuities as an investment option.

The Hong Kong Mortgage Corporation is launching a Life Annuity Scheme in July, which will enable savers aged over 65 to convert a lump sum into a regular income for life, guaranteed by the Government. The Schroders research shows that 30% of respondents are either very interested or quite interested in this public scheme.

“We are glad to see relatively high local interest towards annuity products, as we believe that should play a role in retirement financial planning. An annuity, be it from the public or private sector, will provide quite a stable base in terms of the income people will get, which would then give them more bandwidth to take on risk and to put the rest of their money in market-linked assets that have a bit more growth,” Ms. Morgan says.

But she thinks annuities only form part of the answer for generating a retirement income.

“The annuity from the Hong Kong Mortgage Corporation has fixed increases. It doesn’t have inflationary increases,” she says.

Instead, she thinks people should consider blending an annuity with other products that give more growth to provide a buffering against inflation.

Ms. Morgan particularly likes outcome-oriented investment products that are designed to provide a return above inflation.

She adds that one of the issues with investing in a non-outcome-oriented way is that there is a risk of just following the market up and down, particularly if people invest passively or into plain vanilla equities.

“The amount of skill people need in those last ten years before retirement is quite important because there is a trade-off between preserving capital in the fund but also trying to grow the assets at the same time,” she says.

Ms. Morgan adds that an outcome-orientated solution is particularly important in the 15 to 20 years after retirement. “This is when sequencing risk first begins to be an issue, because if you have a large account size and you have a significant fall in the account early on, you can never regain that as you are actually drawing assets out of the account all the time,” she says.

Schroders sees generating an income flow in retirement as being an imminent challenge, and it is prepared to work with the authorities and pension scheme providers in Hong Kong to help shape the best solutions. 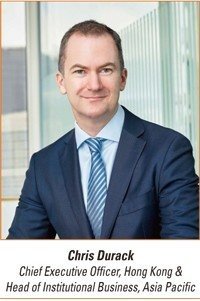 Chris Durack, chief executive officer, Hong Kong & head of institutional business, Asia Pacific, at Schroders, says: “The Hong Kong Mandatory Provident Fund system could be used to not only help Hong Kong workers save for retirement but also to offer them decumulation solutions. It could do this by providing a number of different default solutions in which people could invest, enabling monthly drawdown, but also factoring in the growing longevity risk and evolving returns environment.”

South Africa has recently introduced legislation allowing for default post-retirement investment if people do not make their own choice or leave the plan.

Authorities in the UK and Australia are also considering default options.

Ms. Morgan says: “In many countries around the world we are seeing a call for there to be more institutionalisation of post retirement.”

Important Information
This document is intended to be for information purposes only and does not constitute any solicitation and offering of investment products. Investment involves risks. This material has not been reviewed by the SFC. Issued by Schroder Investment Management (Hong Kong) Limited.