Standing out from the competition

Shanghai-based China Universal Asset Management (China Universal) was one of the best performing Mainland asset managers in 2017, with total assets under management (AUM) growing more than 15% year-on-year, driven by its mutual fund and segregated account investments, which outperformed the industry average.

CUAM HK’s success was also recognised with AAM’s 2018 Best of the Best CIO of the Year (Hong Kong) award. 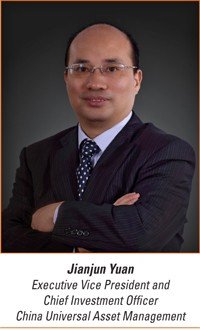 According to Jianjun Yuan, its executive vice president and chief investment officer, the company’s total AUM reached approximately 550 billion RMB (US$87.24 billion) at the end of 2017, up from about 476 billion RMB a year earlier.

The AUM of its mutual funds, excluding money market funds, hit 188.34 billion RMB, placing it seventh out of the 113 mutual fund companies in China.

“Our business growth was predominantly driven by two factors,” he adds. “First, active equity mutual funds have delivered outstanding performance in 2017, among which seven products gained more than 30% within the year, while the best performer gained more than 50%.”

“Second, [our] segregated account service managed to maintain a stable growth rate of approximately 20% last year to achieve more than 140 billion RMB in total assets as of December 2017.”

Among its institutional clients, China Universal has done particularly well in managing insurance assets, he says.

According to China Fund News, the AUM of mandates from Chinese insurance companies managed by China Universal reached 23.75 billion RMB as at June 30, 2017, accounting for almost 10% of the industry’s total – the highest among its peers, and 42% more than its closest rival.

“We also won recognition from institutional clients such as China Life Insurance (Group) Company,” Mr. Yuan says. He points out that China Universal was awarded five prizes, including Best Accumulated Return and Sustainable Investment Performance, in China Life’s three-year evaluation among all of its external domestic asset managers in 2017.

Despite an increasingly competitive industry landscape, he believes the company’s competence in active equity investment will help it to stand out from rivals.

From a cultural perspective, China Universal has developed a “client-first approach which integrates integrity, passion, teamwork and gratitude” to its philosophy, and the firm has devoted itself to becoming a high-quality “prosperous” fund management company. “This is the footstone of all of our achievements,” notes Mr. Yuan.

According to Mr. Yuan the main focus for China Universal is to keep exploring both onshore and offshore active equity investment opportunities through continuous improvement in product development, institutional client service, and investment management.

He says the average three-year and five-year accumulated return of equity funds actively managed by China Universal at the end of 2017 was 89.86% and 184.98%, respectively. Their average annual returns both surpassed 20%, the best of the top-ten mutual fund companies in the Mainland, he adds.

“We will continue to play our advantage in active equity investment and earn stable returns for our clients. We’re also very positive on our segregated account business with the increasing asset allocation demand from institutional investors such as pension funds, banks and insurance companies,” Mr. Yuan says.

“The institutional investors prefer to hire top and competent asset managers to look after their investments. With our ample investment experience and expertise, China Universal has already built up its brand name amongst clients. Thus, we definitely will have huge potential to garner more cooperation in segregated accounts,” he adds.

As for market trends, he remains “cautiously positive” on the outlook for the A-shares market.

“Despite the strong market rally last year, structurally speaking, the market still has enormous opportunities because China’s economic fundamental and market liquidity remain stable,” he says. “Also, the inclusion of A-shares into the MSCI Emerging Market index will be a significant impetus for the market.”

Sector-wise, he will be looking at domestic consumption-related companies and companies in emerging industries, which are beneficiaries of China’s sustainable economic growth. 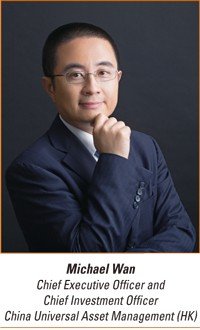 Meanwhile, CUAM HK, which launched its first unit trust in the city in 2012, has made its mark with the “stellar performance of its active funds”, according to Michael Wan, the company’s chief executive officer and chief investment officer.

“We think the industry landscape is becoming more competitive given that more than 70 Mainland financial institutions, including asset management companies and securities companies have established their asset management arms in Hong Kong,” Mr. Wan tells AAM. “Having said that, we believe only five to six players have the investment capacity to maintain their long-term dominance in the market. CUAM HK is one of them.”

He says the company’s flagship active funds, including the CUAM China-Hong Kong Strategy Fund, “managed to deliver a consistent market-beating performance over the past few years” and were “awarded the best performer among their peers by a number of fund rating and advisory agencies including Bloomberg and Morningstar”.

“In recent years, the company’s total assets under management were primarily driven by the strong investment return and capital flow of its active funds. CUAM HK is now one of the leading Hong Kong-based Mainland asset management companies in active management,” according to Mr. Wan.

Mr. Wan says about 70% of the AUM came from China and overseas institutional investors, including top Mainland lenders and insurance companies, and the balance was from retail investors.

He says one of the key advantages that differentiates CUAM HK from its rivals is the “enormous” technical and research support from its parent company, noting that China Universal is currently one of the leading active equity managers in China.

Mr. Wan says the parent company puts emphasis on integrating the investment philosophy between the China and Hong Kong offices. Both investment teams work closely on a daily basis to exchange views on different sectors. This communication “can help both of us to strengthen our investment decision-making process”, according to Mr. Wan.

He says CUAM HK has made “remarkable headway in expanding its overseas business”, pointing out that the company’s Luxembourg-based UCITS Chinese bond fund launched in 2015 drew “significant attraction from institutional investors, family offices and private banks in Europe”.

“Our client base also includes investors from Taiwan and South Korea. We’re now in talks with a number of foreign institutional investors, including pension funds, to manage their Mainland investments,” he says.

Mr. Wan expects the share of Mainland investors in the Hong Kong stock market to continue to grow from about 10% currently because of the steady increase in capital flowing from China. He notes that the share was “almost zero” before the Stock Connect programme went live in 2014.

“We believe the ratio will be driven by the growing overseas asset allocation demand from Mainland investors. They will continue to raise their Hong Kong equity exposure through segregated accounts or fund products going forward,” he says.

According to Mr. Wan, although market conditions have become more volatile amid uncertainties such as US rate hikes and geopolitical tensions, “it won’t undermine Mainland investors’ appetite in Hong Kong market in the long run”.

Touching on his personal management philosophy, Mr. Wan says he emphasises the significance of multi-tasking skills.

“I expect my team members to have the capability to handle various tasks and positions in order to optimise the company’s efficiency,” he says.