Singapore Life Pte. Ltd, the first independent insurer in Singapore since 1970, made its mark by acquiring the business portfolio of Zurich Life Singapore earlier this year. And it’s not stopping there. 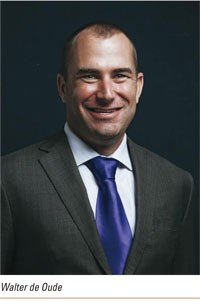 The ambitious life insurer is aiming to be the city state’s preferred life insurance provider and keep growing at a fast pace through 2023 via a combination of mergers and acquisitions and organic growth. The top players in the local industry now include big names such as AIA Group, Manulife Financial and Prudential plc.

According to Walter de Oude, Singapore Life’s founder and chief executive officer, the company is now one of the fastest growing local insurers in Singapore. He says the company recorded organic business growth by providing cover of around S$250 million (US$181.8 million) in the first 100 days of its launch in 2017, and is being recognised as the leader in life insurance technology.

“It’s brilliant for a new company to enter into the insurance landscape that is highly regulated like Singapore,” Mr. de Oude says in an exclusive interview with Asia Asset Management.

He says Singapore Life “can do anything” that giants such as AIA Group and Prudential Plc. offer, and “the only difference is that we’re doing it with the usage of super technology, making life insurance service better”.

“With the acquisition of the Zurich’s portfolio, we grew our life insurance coverage for our customers to about S$6.5 billon,” he says. “Zurich is a big brand and we’re only the new kid on the block, but we’re finding that people prefer to do business with the kid rather than the old [companies].”

As such, he says the company will focus on developing its technology insurance platform instead of operating in the traditional agency model.

He says Singapore Life is “deep-pocketed” and has a “large expansion ambition”.

In April 2017, the company raised over US$50 million in the first round of funding from its major shareholders, UK-based IPGL Limited and Hong Kong-listed Chong Sing Holdings.

“We’re currently looking at a number of [acquisition] and expansion opportunities,” Mr. de Oude says, adding that insurers and financial institutions that can add value to the company’s business, such as asset managers, are on its radar.

The company is likely to raise funds from its existing shareholders for the next acquisition, but will “always look to consider external third-party capital, depending on the quality, profiles, and value-add of the institutions”, he says.

As for its investments, Singapore Life is seeking high yield assets in order to provide better returns to policyholders.

The company currently runs “a portfolio of about S$150 million, which is growing at about S$10 million to S$20 million per month”, according to Mr. de Oude.

About 80%-90% of Singapore Life’s insurance assets are allocated to long-dated investment grade corporate debt, and the balance is placed in unrated bonds issued by companies with stable cash flows, he says.

“The investment is chosen to match the duration of the underlying policies we write,” he adds.

The company plans to further outsource its fixed income portfolios to external managers.

He says the selection of external managers depends on whether they are able to form “a good personal relationship” with the company.

“Sometimes having an excellent manager which is not on the same wavelength with us is not good for business,” he explains, adding that quality of communication between asset owners and managers is key for better long-term performance.

From an asset rebalancing perspective, Mr. de Oude says Singapore Life tends not to have an active asset management framework because, as a life insurer, its long-term goal is to match assets with liabilities.

“A buy-and-hold strategy is in line with our liability profile and is also a very cost-effective way for us to run our assets book,” he says.

He describes market conditions as “challenging” over the past six months, with a flattening yield curve.

But he believes that persistent US inflation and long-term interest rates that are rising at a slower pace than short-term rates will “ultimately” have an impact on the yield curve.

He expects the yield curve to remain “positively sloped” and for long-term yields to continue to rise in coming months.

Mr. de Oude notes that different asset classes are becoming increasingly correlated and their prices are moving in tandem, but believes the trend is unlikely to persist over the long term, especially as the market moves into a new phase of the economic cycle.

He says Singapore Life is looking to diversify its asset allocation in a “safe and long-duration” manner to generate alpha and minimise market volatility.

The company does not have any position in alternative assets in its portfolio and has no plans to invest in such strategies in the short term as it needs to have enough solvency capital to match policy liabilities, he says.

Singapore’s life insurance industry managed assets of approximately S$202 billion at the end of June, up 11% from a year ago, according to data from the Life Insurance Association of Singapore.