Malaysia's Employees Provident Fund (EPF) has promoted Rohaya Mohammad Yusof to chief investment officer, the first woman to hold the job in the history of the country’s largest pension fund. 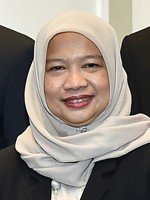 She succeeds Mohammad Nasir Ab Latif, who retired on December 31 after working at the EPF for 37 years.

The appointment confirms an October 9 report in Asia Asset Management which quoted sources as saying that Ms. Rohaya, who was head of private markets, was the front-runner for the position.

The EPF also named Nurhisham Hussein, who was head of the economic and capital market department, as chief strategy officer.

He fills a position that’s been vacant since March 2019 when Alizakri Alias, who was previously in the role, was promoted to chief executive officer.

According to Mr. Alizakri, the new appointments are testament to the EPF placing "a lot of priority in a strong talent and leadership succession plan".

"Both have a keen understanding of the uniqueness of our establishment as a long-term, member-linked investment fund. At the same time, Rohaya and Nurhisham bring along fresh perspectives from their time before the EPF, which will certainly be very invaluable to our team," he says in a statement on January 7.

Ms. Rohaya joined the EPF in 2008 as head of corporate finance. She previously worked at Maybank Investment Bank for 18 years, and was executive vice president for corporate investment banking when she left.

Mr. Alizakri says she is "one of the most well-respected and highly regarded individuals in the financial industry", and “very well-positioned to provide a timely element of diversity to our senior management team”.

Including Ms. Rohaya, there are now 16 women and 22 men in the pension fund’s senior management line-up. One position is vacant.

Mr. Alizakri describes Mr. Nurhisham, who joined the EPF in 2014, as “one of the nation’s leading market economists” with “a wealth of experience in building a social security strategy with a deep impact on our country”.

He says Mr. Nurhisham’s “breadth and depth of analytical insights will certainly bring immense value to the EPF’s efforts in ensuring a sound corporate strategy for the long term”.

According to Mr. Alizakri, 2020 and beyond will be challenging, but he is confident the pension fund, with its new team, is “well-equipped to achieve our desired milestones and goals”.