There are occasions when temptation gets the better of us. Like digging prematurely into a tax-advantaged college education future fund for a perceived necessity, or calling an emergency number for a non-emergency. That is why the 529 education savings plan in the US is ring-fenced and subject to various taxes and penalties on earnings if it isn’t used for the stated purpose. Likewise, willfully calling 911 for non-medical emergencies could result in criminal penalties.

There is no doubt that the coronavirus pandemic the world is now facing is of historic proportions, which may result in a global economic recession of equally epic proportions. Government-funded health and economic rescue plans are plentiful, of the order of 25% of gross domestic product in major countries such as Germany and the US, and around 16% for a developing country like Malaysia.

However, temptation has overtaken Asia Pacific pension plans, both large and small, to help those facing hardship from the pandemic. The Australian government is allowing individuals to access up to A$20,000 (US$12,810) of their superannuation funds before June 30, 2021. India is allowing members of its Employees Provident Fund to withdraw 75% of their savings, or three months of salary, whichever is lower.

Malaysia announced that employees’ contribution to the Employees Provident Fund – which incidentally is a well-respected retirement fund – would be cut from 11% to 7% of their salaries. In addition, members can withdraw a total of 6,000 ringgit ($1,386) over the next 12 months.

On the other hand, Hong Kong’s privately-operated Mandatory Provident Fund (MPF) has resisted calls to allow early withdrawals and deferring or reducing contributions. It did so by restating the MPF’s mission: to accumulate retirement savings through long-term and regular mandatory investments with the benefit of compounding.

Brunei Darussalam is allowing small and medium enterprises to defer their mandatory contributions for employees into the Employees Trust Fund (ETF) by six months – but only if they promise to replenish those accounts within 18 months. Meanwhile, the government will contribute on behalf of self-employed workers for six months.

By using investment science and modern portfolio theory, this study will illustrate why retirement savings plans like the ones in Hong Kong and Brunei Darussalam, and the US’s 401k, discourage early withdrawals or reduced contributions.

The primary reason is because it has an impact on your cumulative savings for retirement, which is a function of your planning horizon, tax status, early withdrawal quantum, and/or reduction in contribution. In finance, the lost cumulative growth potential in the retirement account value is referred to as an opportunity cost.

To illustrate this point, we created a hypothetical retirement portfolio that is 60% invested in equities (S&P 500, for convenience) and 40% in government bonds (Barclays US Aggregate Bond Index, for convenience), and subjected it to the realised returns of actual historical data over a 30-year planning horizon in three different scenarios.

In the first case, the retirement account cumulates based on the prescribed asset allocation’s total returns, which is rebalanced annually, and a 11% per annum contribution from a member earning $84,000 a year This is called the unrestricted portfolio.

In the second case, the contribution is reduced to 10% per annum throughout the planning horizon, and in the third case, there is a one-time early withdrawal (or capital invasion) of $39,000 in 1993. We chose the withdrawal amount to be roughly equal to the cumulative reduction in the member’s 10% reduced contribution level over the 30-year period, a certainty equivalent calculation of sorts. Everything cumulates pre-tax and pre-penalties.

The accounts are all seeded with $10,000 initially in January 1990. As the three account values in Figure 1 illustrate, there is a reduction in terminal retirement account values in both the early withdrawal and reduced contribution cases compared to the unrestricted portfolio. 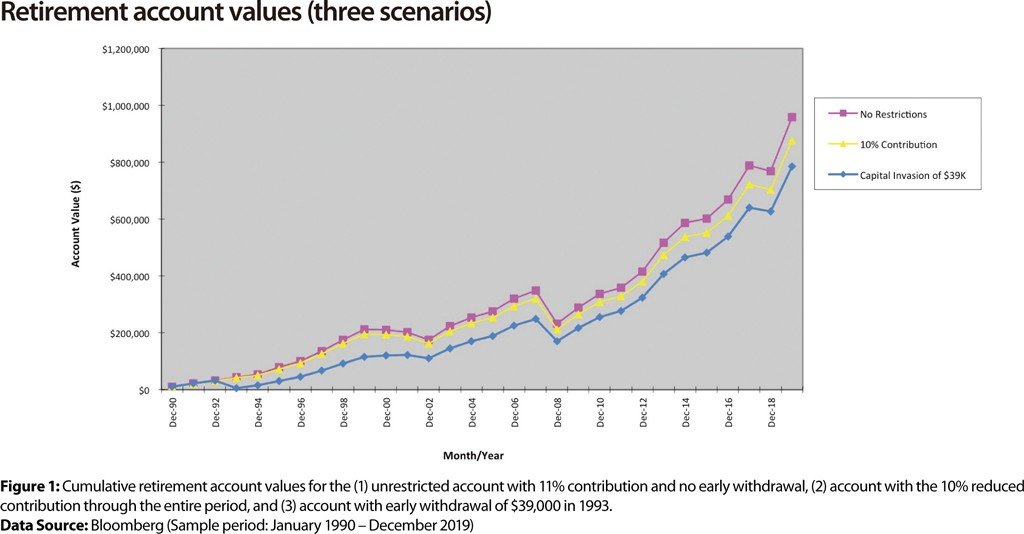 The December 2019 terminal value for the unrestricted account is $957,760. The values for the account with 10% reduced contribution through the entire period is $876,181, and $785,817 for the account with the one-off early withdrawal. The opportunity costs for the latter two accounts are minus $81,579 and minus $171,942, respectively. The loss in value to the early withdrawal account is around 18%. Table 1 shows the difference over time in these two account values against the unrestricted portfolio.

This illustration is not to demonstrate whether one invasion strategy dominates the other, but rather to show the calamitous effect on cumulative account values when there is temptation to invade into the retirement savings pot during the accumulation stage.

Now that the point has been made analytically, let’s switch from a positive theory of economics to the normative one. What should governments do or allow given peoples’ temptation to dip into their biggest asset pool available during extenuating financial circumstances, like the current pandemic?

But it can do more. If we assume that a government’s emergency cash transfers to its citizens is enough to negate their need to invade into retirement accounts, the state can then, for a fixed period, subsidise the monthly contribution employees make to their retirement accounts.

Let’s say the individual’s contribution rate is reduced from 11% to 7% a year for a period, with the government contributing the four-percentage-point difference. This is a $3,360 per annum government top-up for an individual earning $84,000 annually, which is money freed up on a pre-tax basis for the person to spend on essentials like groceries and healthcare.

Governments have also been motivating employers not to lay off their employees. As a result, many governments have been subsidising employees’ wages. In Singapore, for example, the subsidy is up to 75% over nine months for the sectors most affected by the pandemic. Such subsidies should include the employers’ contribution to the employees’ retirement savings scheme, which is the case in Singapore.

On the bright side, every global crisis presents opportunities for collective learning. It offers the possibility for retirement plans to upgrade, innovate, transform and digitise, and to improve financial economic outcomes for its members. The asset management industry in turn can offer appropriate lifecycle products to retirement schemes at reduced fees.

*Joseph Cherian is practice professor of finance at Singapore’s NUS Business School and academic adviser to Asia Asset Management. Emma Yan is an adviser at Endowus.