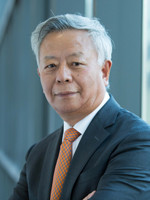 The bank’s board of governors voted to re-elect Mr. Jin at their annual general meeting on July 28, AIIB says in a statement after the meeting.

The governors are finance ministers from over 100 AIIB member countries.

The Beijing-based AIIB invests in sustainable projects in Asia, and has approved US$19.6 billion for 87 projects in 24 countries since its inception in 2016.

Mr. Jin, the AIIB’s first president and China’s former vice minister of finance, says it’s been a "tremendous privilege" to lead the bank through the foundation years.

"As we look forward to the next decade, we will expand our investments from core infrastructure to the infrastructure for tomorrow – infrastructure that will tackle climate change, enhance connectivity within Asia and the rest of the world," he says in the statement.

Mr. Jin was secretary-general of the Multilateral Interim Secretariat, which set up to create the AIIB, before being appointed to head the bank in 2016.

Prior to that, he was chairman of investment bank China International Capital Corp. and was also vice president of the Manila-based Asian Development Bank.

He was China's vice minister of finance from 1998 to 2003 under President Jiang Zemin.