Principal: In Hong Kong for the long haul

Global retirement leader Principal has been part of the Mandatory Provident Fund (MPF) since the system first began 20 years ago in December 2000.

But the firm’s roots go back considerably further. Principal Financial Group (the Group) was founded more than 140 years and today operates in 25 different nations and territories around the world, including Hong Kong, which it first entered in 1996. 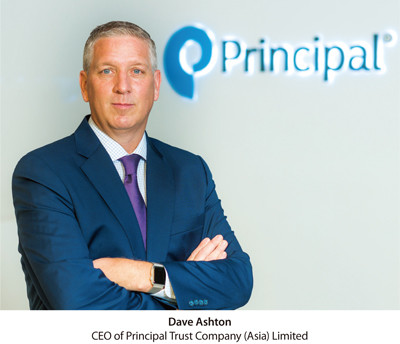 Dave Ashton, CEO of Principal Trust Company (Asia) Limited, attributes the Group’s leading position as an MPF provider to its well-recognised global expertise in retirement planning, which it combines with a strong focus on local needs in Hong Kong.

At the same time, its equity funds have put in impressive performances, with 85% of funds with a track record for more than a decade outperforming their peer median over the majority of periods1.“It is exciting to have been part of MPF for its whole 20 years and we see great opportunities going forward,” Mr. Ashton says.

As a retirement specialist, Principal places a strong emphasis on educating MPF members to help them make informed decisions for their retirement.

The education it offers has evolved in the 20 years since the MPF was first launched, and it has progressed from helping scheme members get to grips with basic investing in the early days, to reaching out to people who are not yet participating in the scheme, including offering general financial education to students in schools.

Principal has partnered with the Hong Kong Family Welfare Society (HKFWS) since 2009, providing both sponsorship and support. In September this year it jointly launched an investor education campaign with HKFWS, offering online video clips and educational materials for children, including a story book, different forms of money (Octopus card, coins, banknotes) and a wallet for role play.

The Group uses a wide range of social media, including YouTube, to reach as many people as possible to raise awareness of active management of their own retirement investments. In April 2020, it launched a new investor education blog section on its website offering investment tips at a glance, aimed at people with only basic investment knowledge, followed in August by an Investment 101 series on Facebook, sharing basic investment principles in a light-hearted way.

“We offer lots of investor education through our website so that it is available to anyone. With our mobile app, members can perform fund switching, set fund price alert and check account information at their fingertips,” Mr. Ashton explains.

He adds that the investing world has become more complex in the past 20 years, and as a result, Principal stresses the importance of continuing education to its members.

“Even if you thought you knew investing when you were younger, it has changed. I think the need for all of us to be students and keep learning and understanding that there are always new investment options, new products and new solutions is important,” he says.

One area of investor education that Principal is currently focusing on is the decumulation phase to help members understand the options they have to convert the lump sum they have saved into retirement income, such as through using mutual funds with income streams or annuities.

People tend to focus on accumulation, but as people transition into retirement, they need help with decumulation and knowing what options are available to make that money last in retirement.

“We will continue to focus on what we call the ‘to and through’, or accumulation and decumulation, to truly help people transition from employment to the rest of their lives,” Mr. Ashton adds.

Mr. Ashton thinks one of the strengths of the MPF is that it is mandatory, meaning people start saving for retirement as soon as they begin working.

But he points out that the current contribution levels, which are capped at 5% of employees’ salaries, up to a maximum of HK$1,500 a month, are insufficient to provide people with an adequate retirement income.

Even if they make additional contributions through the Tax Deductible Voluntary Contributions (TVCs), he points out that the savings rate is still not high enough for most people, particularly given Hong Kong’s high longevity rates.

In fact, according to a report by the Global Ageing Institute, which was sponsored by Principal, workers in Hong Kong were found to have an inadequate income replacement rate from the MPF pension system when they retire, significantly below the 60% to 70% generally recommended by retirement advisors.

Mr. Ashton stresses that people need to understand that just because a savings threshold is set by the government, it does not mean that only contributing that amount will be enough to provide them with a good retirement income. “Over time, the minimum and maximum relevant income levels should continue to be reviewed to ensure it is set at an appropriate amount,” he says.

In the meantime, to help people understand how much their pension savings are worth and to encourage them to set aside more, Principal expresses people’s MPF accumulations not just in terms of a lump sum, but also as the level of retirement income it will generate. “In other markets we have seen this approach work quite well,” Mr. Ashton says.

He adds that helping people think about their pension in terms of an income replacement ratio is very important in enabling them to understand how much they have saved towards retirement.

Principal also educates its MPF customers about the need for total retirement planning. “One of the advantages Principal has in this space is that our focus is not just on the MPF but on retirement,” Mr. Ashton says. As many people in Hong Kong have multiple retirement accounts, he suggests the first step is for them to consolidate all of their MPF accounts into one, so that they can see exactly how much they have saved.

He adds that while TVCs are a good way for people to supplement their MPF savings level, they are still likely to need to save more on top of these, so they need to look at putting money into other mutual funds to supplement their retirement income.

Principal puts a high emphasis on engaging with its customers to encourage them to think about retirement saving. It does this through both regular communications, such as annual benefits statements, and more frequent ones, such as showing members their account balances through regular SMS messages.

“We make sure people have access to individuals they can talk to and to technology, whether this is our apps or our website, so that whatever way they want to interact with us is available,” Mr. Ashton says.

Technology is another area in which Principal has evolved since the MPF was first launched 20 years ago.

It is making significant investments in its digital capabilities, and has recently launched a new website, with a new “Retirement Service Centre” member portal due to be up and running in the second quarter of next year. But Mr. Ashton stresses that Principal does not have a digital strategy, but rather a customer strategy.

“Technology in Hong Kong is centred on the customer, on what they want and how we deliver it to meet their needs. We have evolved with the times, making sure we have a website that meets customers’ needs and investor education that is available when they want it,” he says.

Technology has also been an enabler for Principal, and through introducing automation and other efficiencies, it has been able to reduce its fund management fees six times in the past 20 years.

Looking forward, Principal supports the introduction of eMPF, under which technology is intended to standardise, streamline and automate the administration of the MPF to reduce costs and enhance the customer experience.

But Mr. Ashton cautions that the new platform must be done in a way that truly leads to lower fees but does not disrupt the industry. “We will continue to work with the government and Mandatory Provident Fund Schemes Authority, as well as other trustees, to implement it in a way that is as smooth as possible for scheme members,” he says.

In the meantime, Principal is committed to continuing to help people in Hong Kong to save enough to meet their retirement needs. “We are a global asset manager with expertise not just in the MPF but retirement as a whole. We are uniquely positioned to help scheme members save enough and have enough in retirement.”

1. The methodology measures the percentage of time the fund stands at either 1st or 2nd quartile in the past eleven calendar years as of 31 Dec 2019. Peer median represents the middle performance within a Morningstar peer group (i.e. the value separating 2nd and 3rd quartile). Majority of the periods represents >50% of time.