Back to 2022 Best of the Best Awards Supplement

Leveraging change ahead of the curve

Sumitomo Mitsui Trust Asset Management (SuMi TRUST), one of Japan’s largest asset managers, manages over US$726 billion as of end of February 2022. The company has been recognised in multiple categories in the Asia Asset Management (AAM) Best of the Best 2022 Awards. 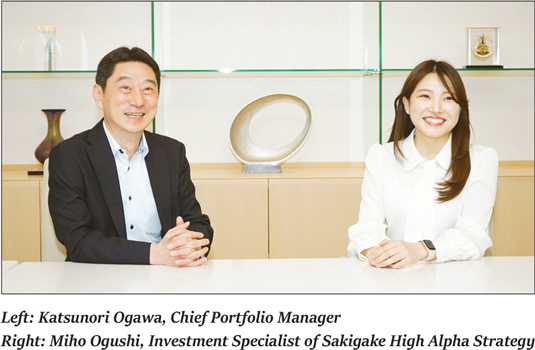 Managed by Chief Portfolio Manager Katsunori Ogawa, the strategy, which exploits the idea that structural change is a key generator of long-term returns, takes it name from the Japanese word for people or things that there ahead of the curve. As such, Katsunori’s investment philosophy focuses on innovative services and products designed to solve societal issues. While these products and services are often invested by only a small companies, Katsunori believes that they can create a ripple effect on a large number of companies with related businesses as they permeate society to create a connected growth story.

The stratetgy aims to generate superior returns by investing in companies that share this growth story, focusing on mid-to-large cap equities that are well-positioned to benefit from structural change in society and individual industries.

Katsunori founded the original Sakigake strategy back in 2003, during a period of significant structural change, which included the growth of emerging countries including China, the development of the internet and a rise in energy prices. Essentially, he believed he could effectively generate alpha by investing in a group of company that would benefit from such structural changes.

The current Sakigake High Alpha Strategy was launched in 2013 to manage a higher risk/return profile portfolio. Katsunori and his team currently manages several portfolios with different concentrations and diversifications.

Since the strategy was first launched, Ogawa has uncovered a number of long-term multi-investment themes around signs of structural change.

“As structural changes in society and industry have accelerated further since the spread of Covid-19, the relative advantage of companies that use technology and proprietary techniques to solve social problems has risen,” he says.

The strategy is currently focused on eight investment themes. This includes the shift to automation which helped to offset rising labour costs, as well as the rise of non-durable consumer goods providers catering to Asia’s growing middle class, and the growth of manufacturers of electronic components that supply unique value-added products.

Other themes included in the strategy cover healthcare, energy, evolving infrastructure and original Japanese products, services, business models and innovation. Under the theme of energy, Katsunori is focusing on domestic offshore wind development. Under the theme of original Japanese products he is investing in companies with a strong competitive edge compared with their global peers.

Katsunori employs a top-down thematic approach to narrow down the investment universe. He then applies a bottom-up fundamental research approach in his selection of individual stocks for the portfolio, leveraging on SuMi TRUST’s equity expertise and a team of more than 20 research analysts.

The results from the high conviction strategy speak for themselves, with Sakigake High Alpha’s three-year rolling returns outperforming the Tokyo Stock Price Index (TOPIX) across the whole period since its inception in 2013. It has also generated alpha regardless of the market condition.

With his long-standing experience, Katsunori has proved that his multi-thematic approach is effective, and will continue to succeed in investing in the beneficiaries by capturing the signs of structural changes over time.

SuMi TRUST, which is well known as a pioneer of impact investing in Japan after it started developing capabilities in this area in 2015, was also awarded the title of AAM’s Best of the Best 2022 Best Impact Investing Manager (Japan), in recognition of its belief that investing in companies that provide sustainable solutions to environmental and social issues will generate good long-term financial returns. It was also awarded Best ESG Engagement Initiative (Japan) and a best performance award for Asian REITs.

For more information on SuMi TRUST’s Sakigake High Alpha Strategy please refer to the QR code below to view its virtual pitchbook, in which Katsunori presents his current investment themes, the stocks he is interested in and why they make an attractive investment proposition.